April 22, 2016: Earth Day and the Paris Agreement Towards Sustainable Societies

Earth Day, April 22nd has rolled around again since its first commemoration in 1970,  founded by US Senator Gaylord Nelson. This time Prime Minister Trudeau has travelled to New York for the signing of the Paris Agreement on Climate Change under the United Nations Framework Convention on Climate Change.. This was, that in November 2015, Canada and 194 other countries reached this international agreement to address climate change that is “ambitious, durable and applicable to all parties”. Its framework recognizes the important roles of subnational governments, civil society, and the private sector. It also highlights Indigenous, community, human and gender rights. In specifics these countries pledged to work to limit the temperature rise overall below 2 degrees Celsius, but are aiming to achieve a temperature rise below 1.5 degrees Celsius by 2025 and 2030. 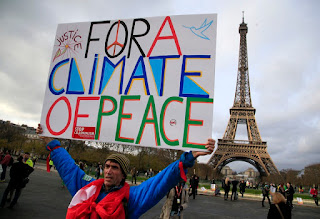 “The number of countries that have indicated their intention to attend and sign the Paris Agreement on 22 April is now up to 155”, said the Spokesperson for the UN Secretary General Farhan Haq in a press conference last Friday. It has been proclaimed to be a record number of countries to sign, validate and then to ratify it. They must also submit a proposal plan for actions for the agreement to be effective. Although, under International Law, signing treaties does not hold the power of enforcement but rather the voluntary dedication to individual countries to uphold the treaty. Preceding the negotiation period the signing of the treaty is to represent each of the states involved between national delegations as expression of intention to comply with the treaty. This process, however is not binding. In fact it is open to a far range of flexibility for countries to modify how they would like. For the next process is for each state to deal with it according to its own national procedures. Only after the approval has been granted under a state’s own internal procedures, will it notify the other country parties under ratification that they consent to be officially bound by the treaty. 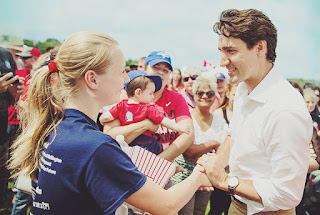 Trudeau is holding plenty of baggage as newly elected Prime Minister after the UN Conference Board reports Canada  with a ‘D’ 14th among 16 countries when it comes to environmental performance; that’s just above United States and Canada. Nine years can greatly tarnish a country’s focus on the environment, of which was blatantly disclosed internationally when former PM Harper removed Canada from the Kyoto Accord. From our geographic size, to our society’s persistence of using dirty energy through coal and oil, our obsession with achieving an American Dream though ownership of gas-guzzling cars. So much of these large policy decisions have been the voices and pressures of the large corporation powers, which have taken control of the room. Where are the train systems that European and Asian countries are flaunting their environmental consciousness? Where is the business in alternative energy taking advantage to our geographical diversity?  Thus, it is not just a political or policy change but a cultural shift. 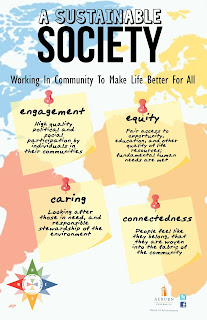 We hear the words ‘sustainable’ and ‘sustainability’ almost everyday but how well do those who hear and use these terms. One definition is an ability or capability of something to be maintained or to sustain itself. It’s about taking what we need to live now, without jeopardizing, the potential for people in the future to meet their needs
Sustainability is what most government policies struggle with. Even if a party at the time has truly made the years of dedication toward, sought insight from many consultants, research groups, and citizens voicing concerns; sustainability falls through the cracks of bureaucracy. Through elections we have lost focus of upholding sustainable goals and values. Parties have measured their focus so far to the left or to the right that they become blinded to working with what we have already established and how we can continue long-term rather than only foresight of  four years. It is however very reassuring that MPs including the House Speaker, are standing up against the party bureaucracy in order to focus on making more representative, partnership and planning in order to make Canada a more sustainable society by listening to civil society.

Referring to the political will and the wave of action that allowed for the agreement’s adoption, UN Climate Chief Christiana Figueres said in a talk at TED 2016 last February in Vancouver, “Impossible isn’t a fact; it’s an attitude.” Perhaps, Prime Minister’s focus on Youth empowerment is just is just the step into the sustainable society we need and have been looking for.
See Also:
What is a Sustainable Society?: #sustainableCND
http://sustainablesociety.com/sustainable-framework/what-is-a-sustainable-society#.VxmoUBMrK8p

What Canada agreed to in Paris - Globe and Mail: http://www.theglobeandmail.com/news/politics/what-canada-agreed-to-in-paris/article27742735/
Sources of International Law explained:https://www.youtube.com/watch?v=0ViSYjt-wGw

Posted by Karli Zschogner at 10:17

Karli Zschogner
B. Sc. Sci. Conflict Studies and Human Rights, University of Ottawa Motto: We must understand the Past, In order to address the Present. How do we do this? By asking WHY and HOW. I am talking about international conflict including crimes against humanity and genocide. Cases from across the world and history are critical tools for evoking empathy and understanding for Sustainable Development. The main value I follow by is to believe in the very best potential in people. We all have self-worth and all should be loved and feel loved, and above all at least be respected. We all have our unique past, present and future experiences, and therefore should never be so quick to judge. Another important realization is that we cannot be 'perfect' but the best thing for anyone in conflict or predicament is to give oneself the ability to sit and LISTEN to what the 'other' side has to say. And that it is why the best thing to do is welcome open dialogue.